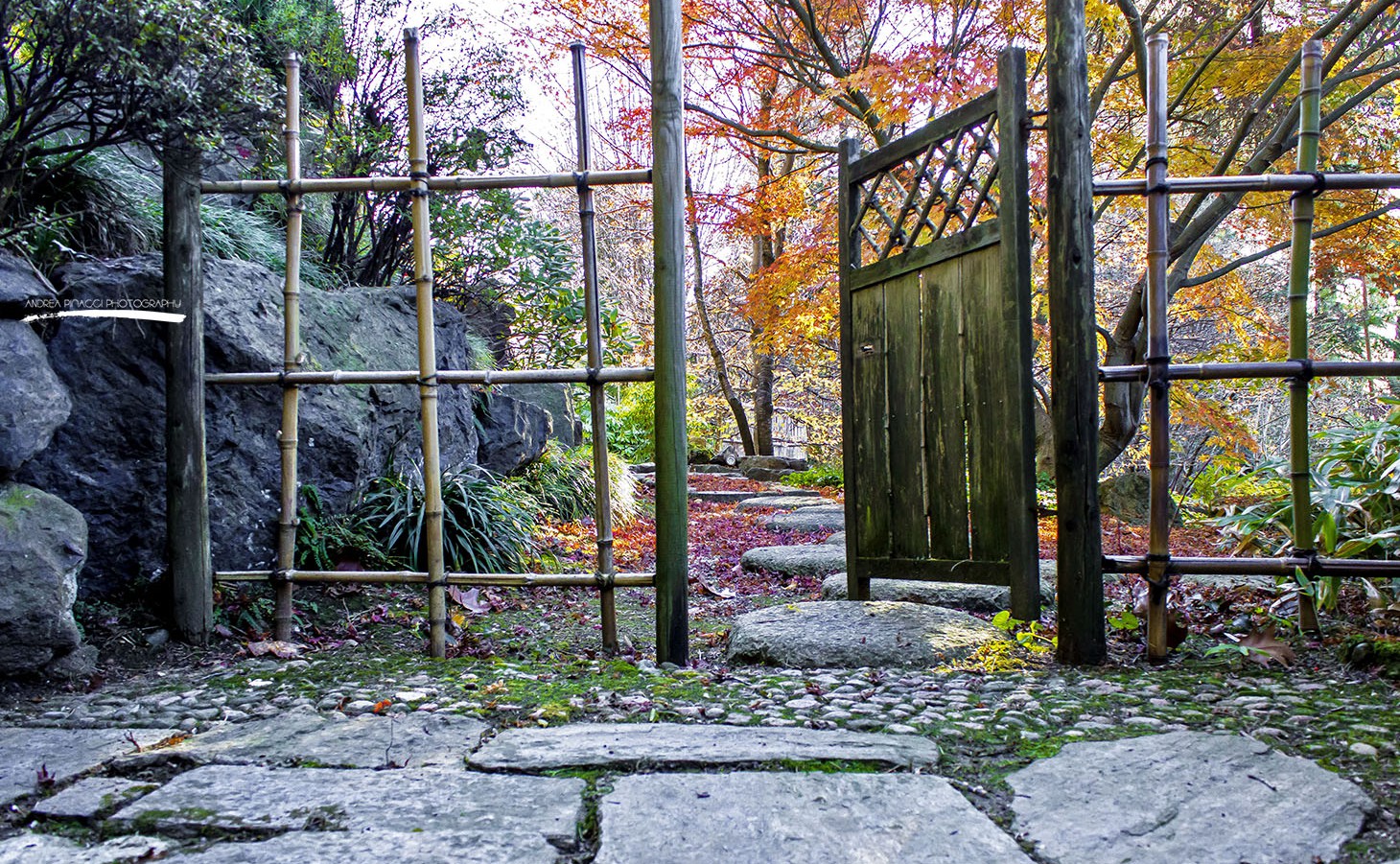 For reasons of their ancestry and their love of Japanese culture, the owners of Villa Paradeisos have put special effort into the design and construction of this garden.
Designed by one of the most famous Garden Art professors from the University of Tokyo, it was then constructed by an entirely Japanese team. They landscaped the site, created a stream over five levels, and added rocks and plants. Many special items were shipped in from Japan including statues, shrine ornaments, stream pebbles, stepping stones, precious woods, and artefacts made from bamboo. The main layout follows the 5 waterfalls placed along the stream. The pebbles and stones were strategically placed to create the stream's very own unique sound as the water flows along. Indeed, it is the unique sound of its running water that distinguishes one Japanese garden from another (they are all different). They all play to the spiritual pleasure of their visitors as they commune with nature.
Another interesting spot is the "abstract" or "dry" garden. A symbolic microcosm, this garden represents the entire planet Earth, with the sea, the land emerging from it, and the horizon barred by a dense bamboo hedge (just like "the hedge, which prevents me from seeing most of the endless horizon" that the poet Giacomo Leopardi described in his poem 'The Infinite').

The plants in the garden are for the most part indigenous Japanese varieties: bamboo, maple, pine, cherry, all shaped and adapted - like bonsai. In spring the stream flows through a flamboyant blaze of red azaleas, while in winter the snow creates its own magical scenes and sculptures. When it rains, all the dewy fronds and perfumes bring out all that's best in this living work of art. The stream flows into a large pond that is completely surrounded by rocks, Japanese pines and cherry trees. The pond is home to myriad irises and water lilies.

This garden has attracted the attention and admiration of countless visitors from all over the world, as well as the Japanese media, who have often broadcast reports from the garden and have even shot a film there. 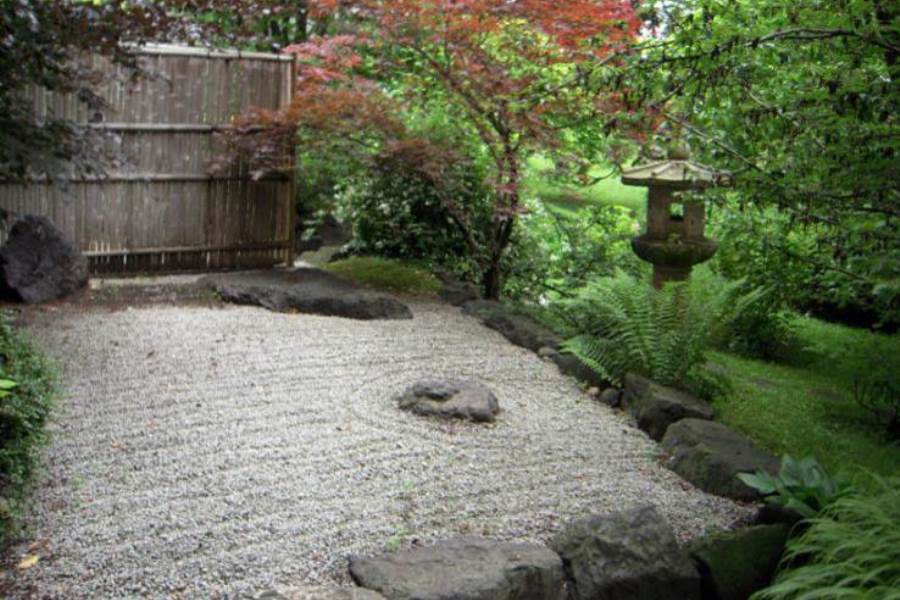 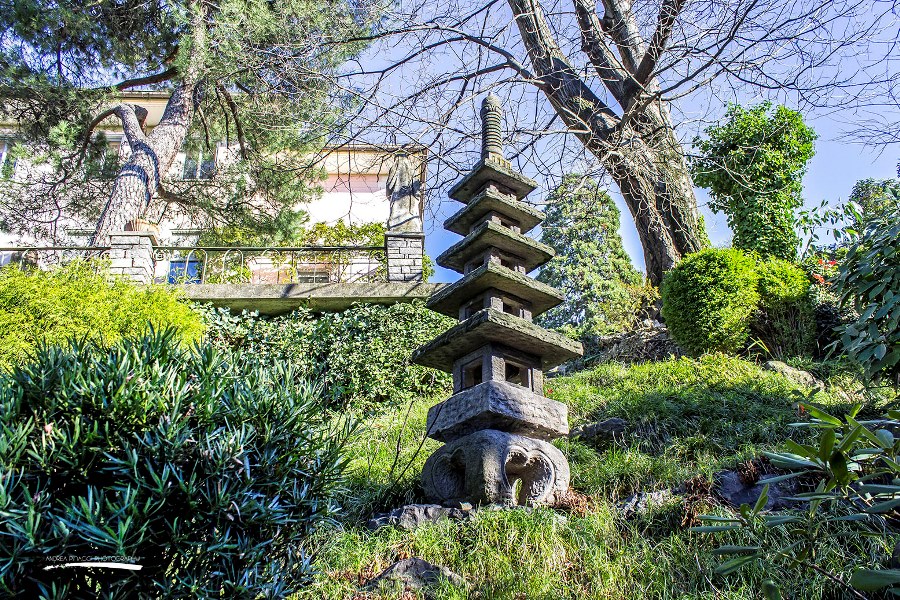 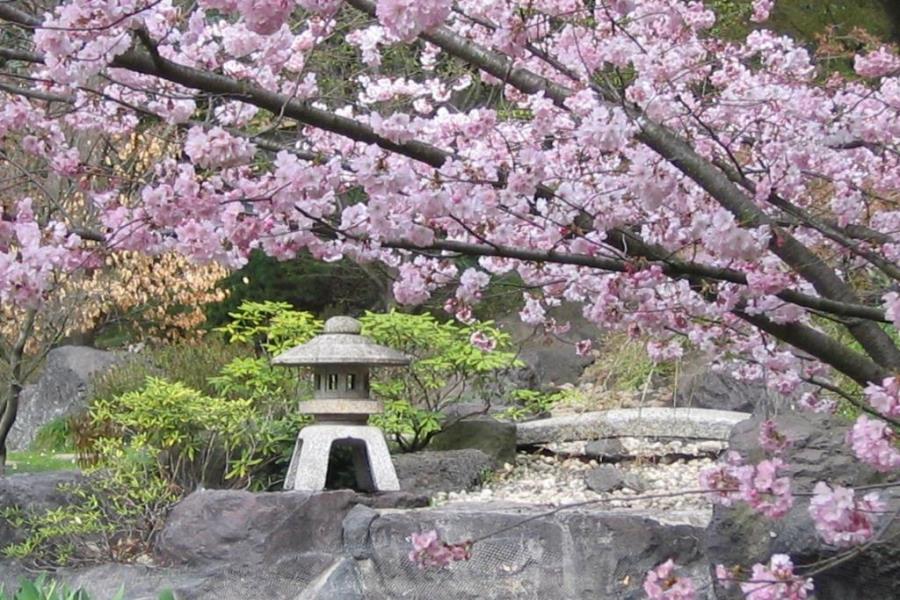 The Villa Villa Paradeisos was opened in 1929 from when dates its current configuration. It has some amusing frescoes dating to the 20s and others in Art Deco style. But the original building dates back to the mid-1800s, and its foundation to the eighteenth-century. The park has been under constant maintenance since the end of the 18th century, by which time the property had already been entered into the area's land registry - the Theresian Maps. The villa, as it is today, has been adapted for hosting events of every kind. The various spaces available for this purpose are the entire garden, the majestic rooms on the ground floor, the conference area and the master bedroom. 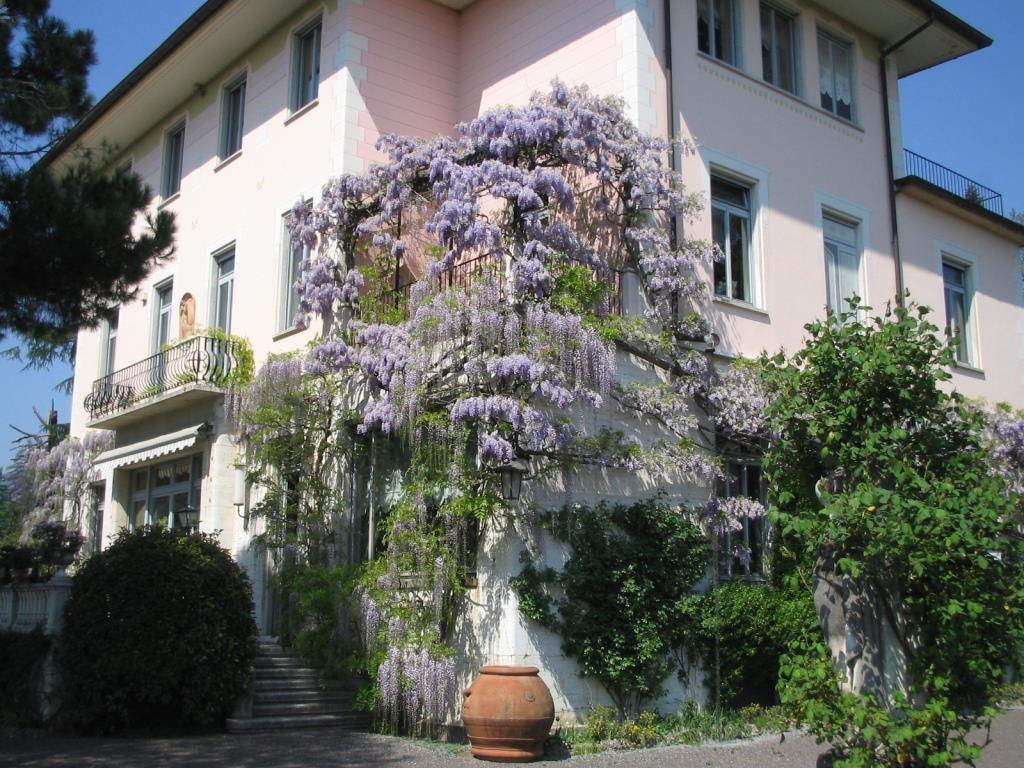 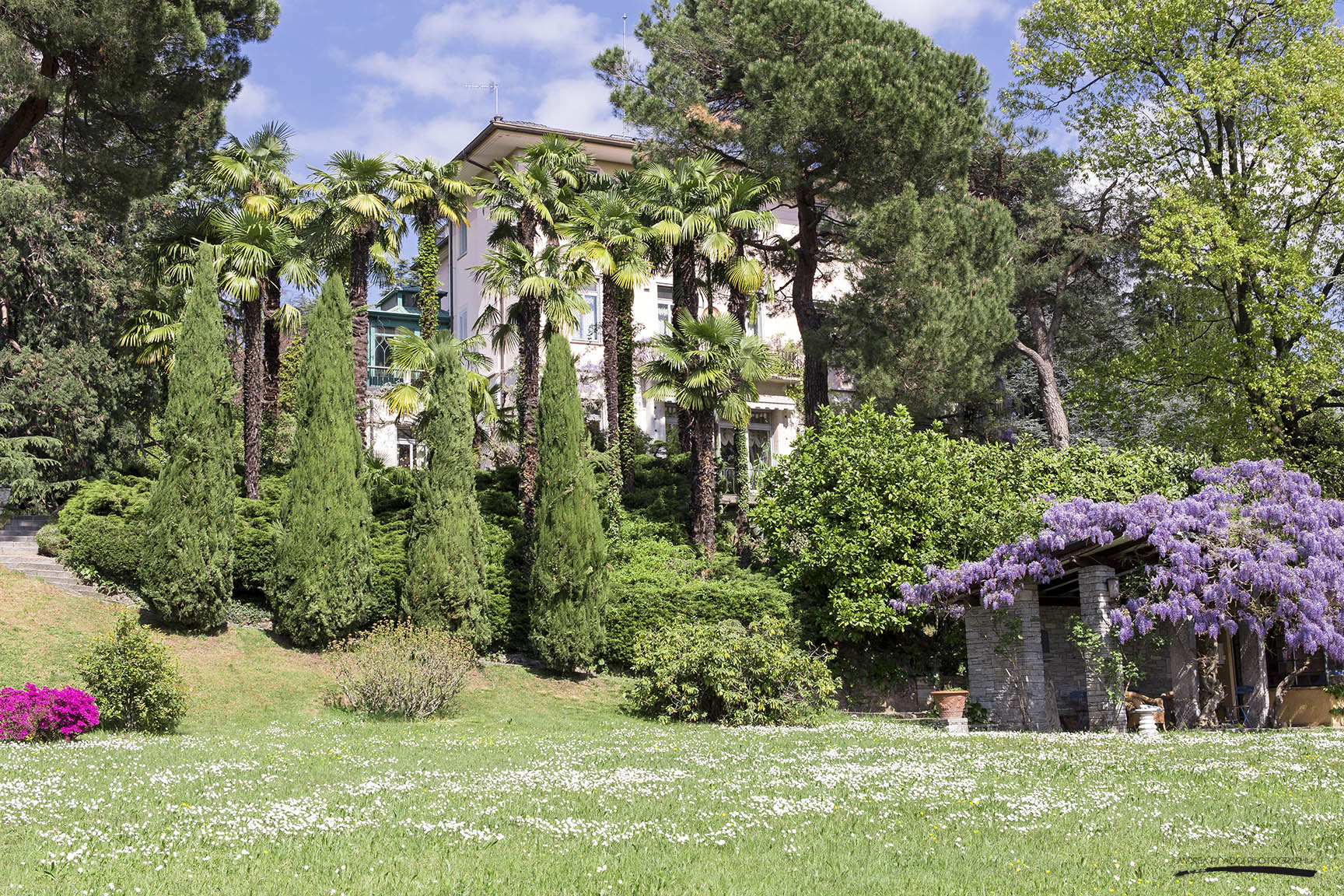 The Park
The Park covers 24,000 sq m, and is embellished with numerous period statues, a small, stone amphitheatre and a number of specimen trees. The views over the lake and the Alps are spectacular.
The garden is the heart and the most spectacular part of the property, hence its name: indeed the word 'Paradeisos', from the Sanskrit, means Garden = Eden.
From May to October, the main lawn hosts a gazebo accommodating up to 200 people seated, and 300 for buffet events. The garden can hold 400 people comfortably.

The Kiosk in the middle of the large park was once used as changing rooms. Its walls have elegant frescoes painted in the '20s by a famous Milanese painter.

Charming and spectacular in spring with its roses and majestic mauve wisteria, it's the perfect setting for receptions, and wedding parties with their pastel coloured sugared almonds and bonbons. 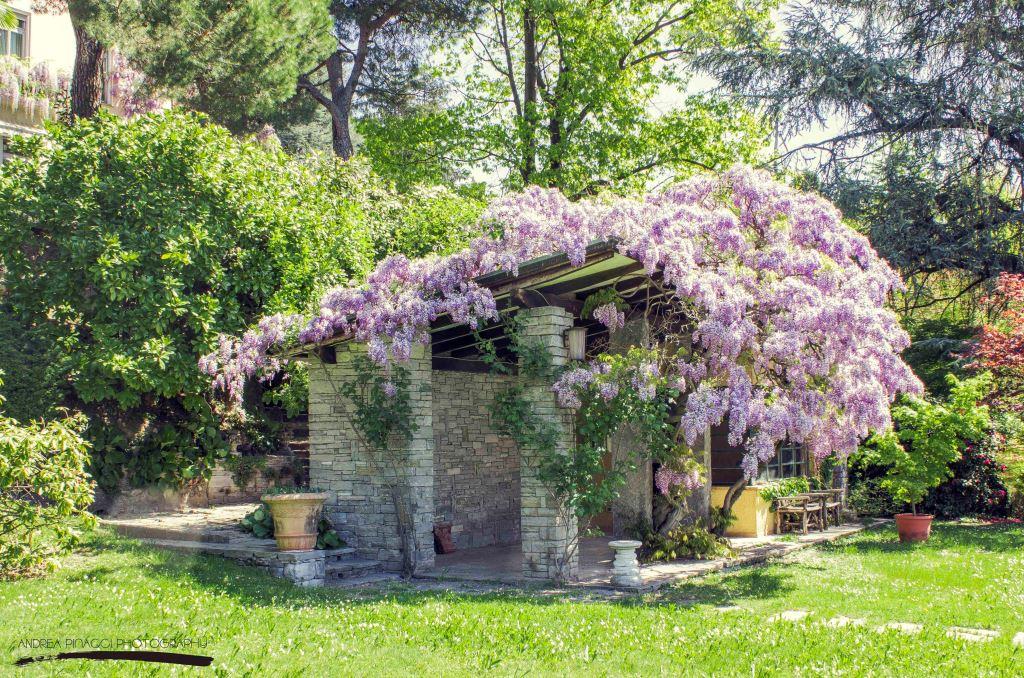 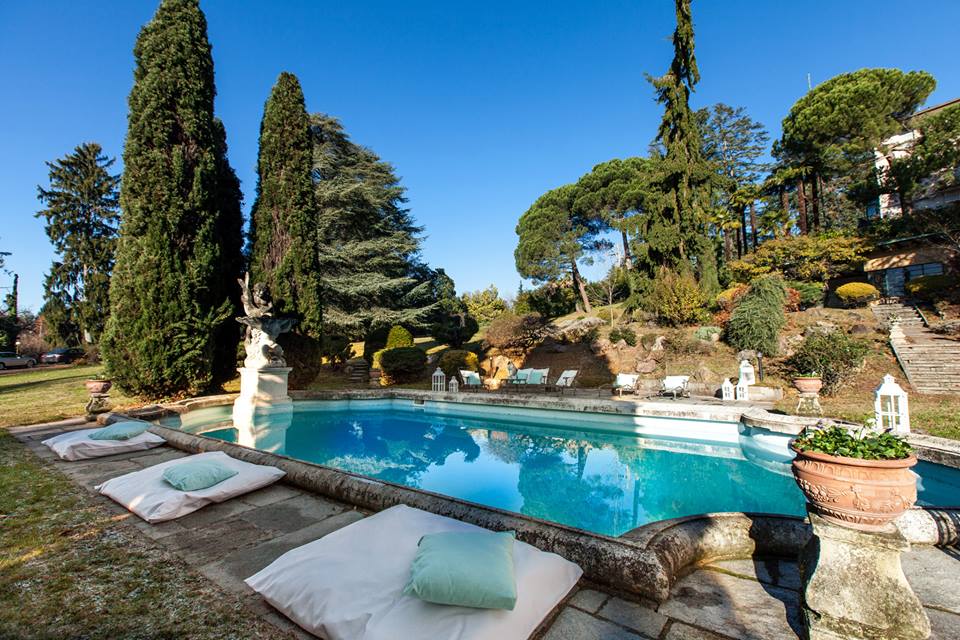 The Swimming Pool
Situated in the lower part of the garden, the pool is a gracious oval shape. It has a sculpted marble surround and a large statue at one end, complete with cherubs, a dolphin and seashells. Bordered by a stone-paved patio, it offers plenty of space for relaxing, or for holding a buffet party, and makes the ideal setting for aperitifs and cocktails.

The Salon
This spacious room has a wood-panelled ceiling and a large period fireplace. The large windows give onto the terrace and the balcony looking over the garden. The views are breathtaking.
Perfect for receptions, gala dinners, seminars and conferences. The room can accommodate 70 for a sit-down lunch or dinner; while the Salon and Terrace together can accommodate 100. The Salon can host 100 people in conference-style seating. 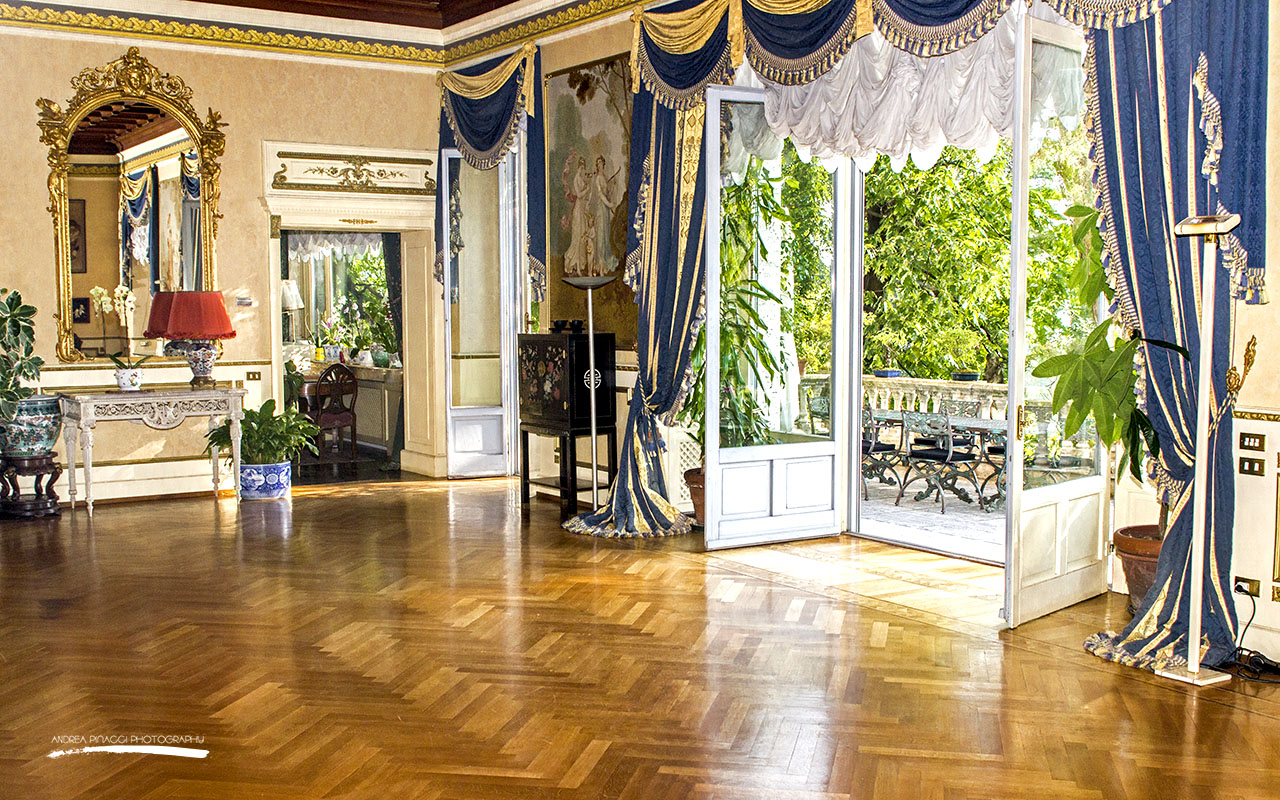 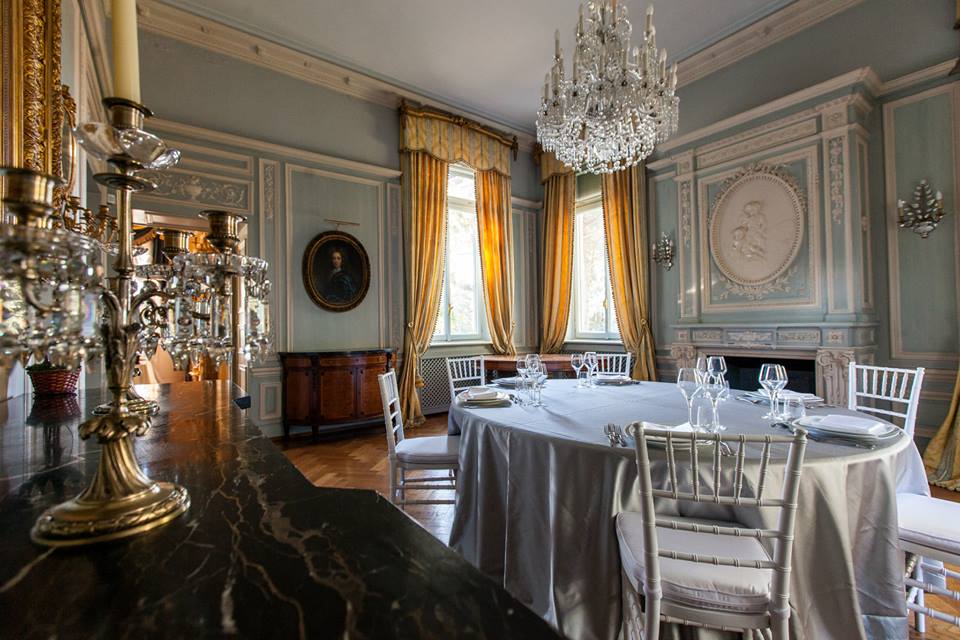 The Napoleonic Room
The room has fabulous Napoleon-III wood panelling, a small fireplace and original stucco work. It has four big windows that look over a lovely corner of the garden.
This room is ideal for gala dinners, product launches, weddings and private meetings. Maximum privacy is assured in this exceptionally elegant setting. It can accommodate a maximum of 30 (seated).

The Library This room reflects the owners' passion for books. The columns, arch and original shelving were all once in a library in an English castle. It is a fascinating room offering the utmost privacy. It is most suited to one-to-one business meetings, video presentations, product launches and interviews. 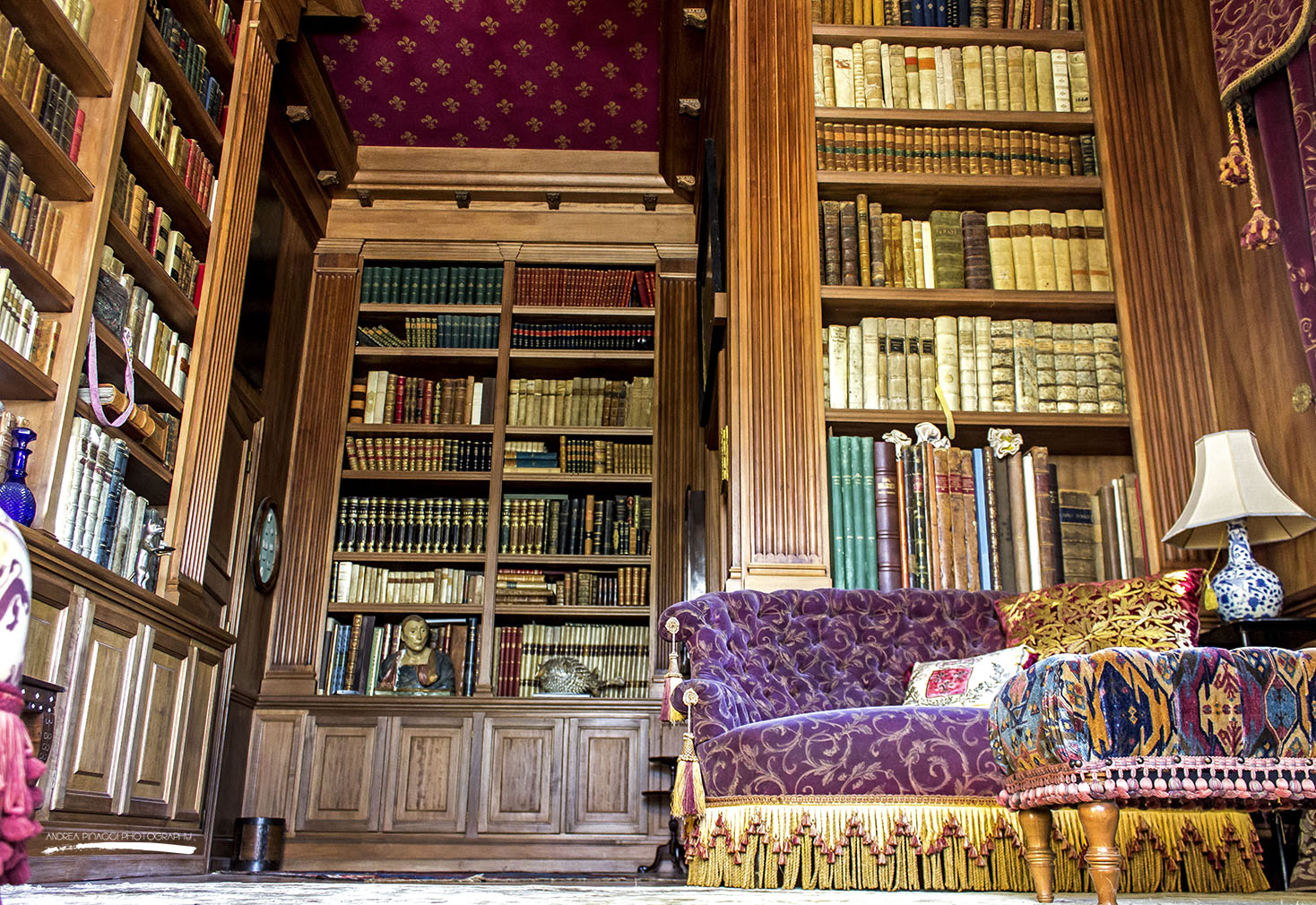 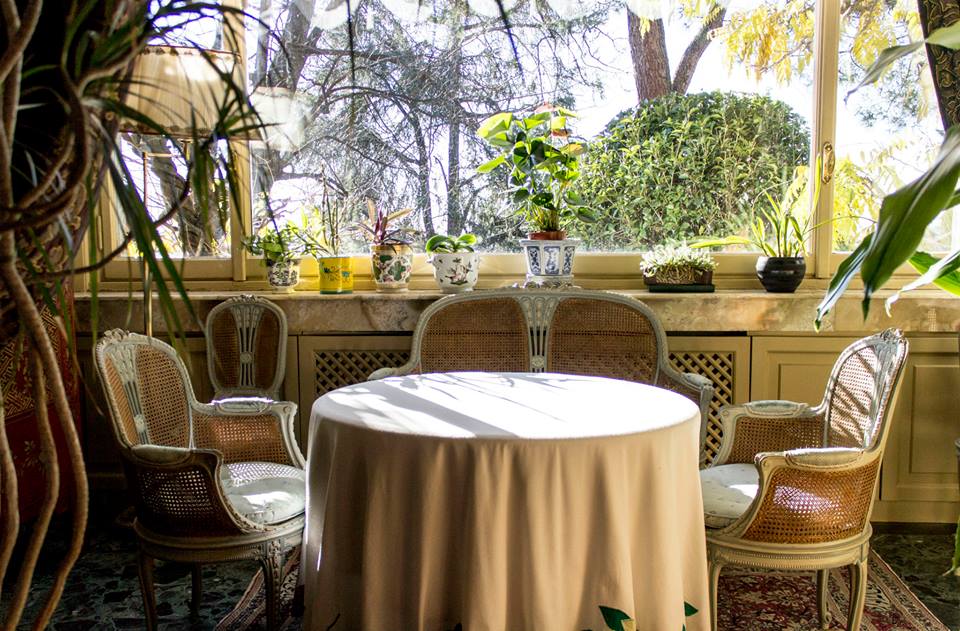 Next to the library, and with large windows overlooking the garden, this charming corner has a spectacular view of the lake and mountains, especially at sunset. The ceiling has a décor that evokes a Venetian house. The walls are in onyx and when touched by light from the setting sun they create extraordinary effects.

This room has a wrought-iron, art deco window, and period curtains, décor and wardrobe. The marble bathroom fittings are all original and the stone fittings containing ammonite fossils; and there is a Turkish bath, too. 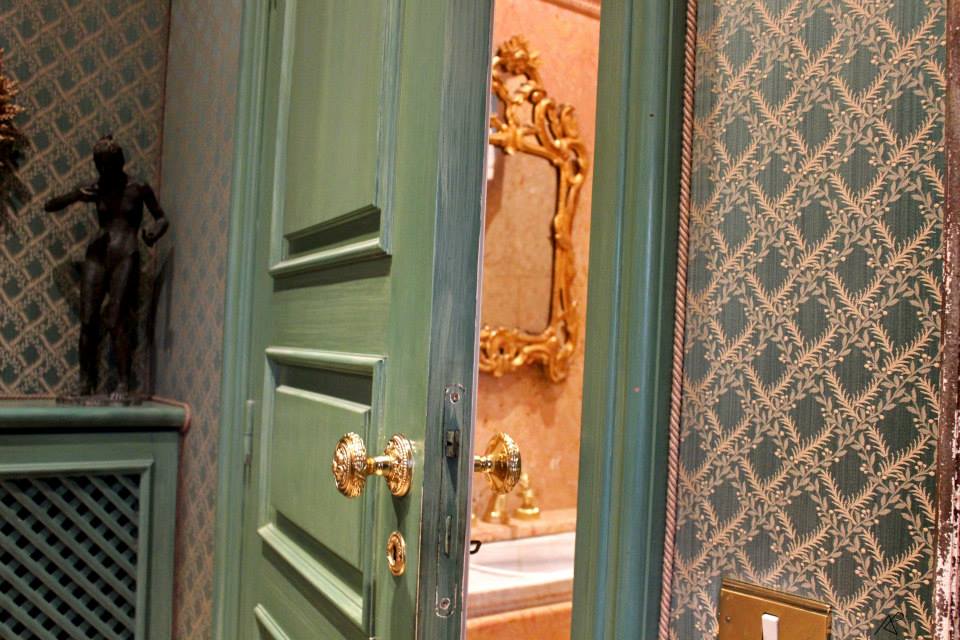 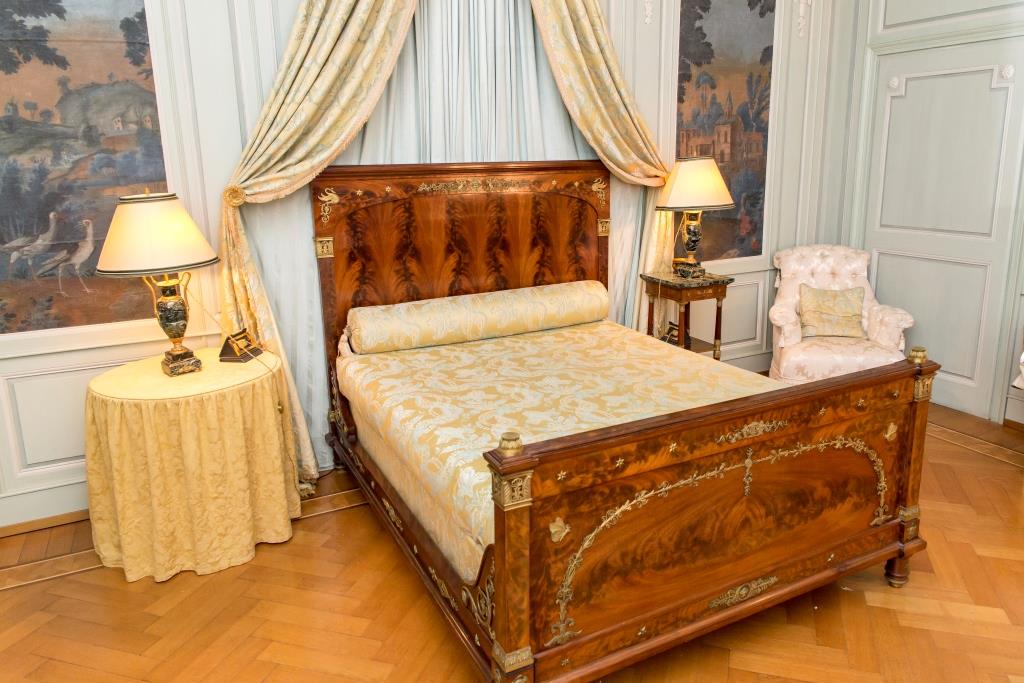 The Master Bedroom All the walls have wood panelling and stucco work. There are three wall tapestries, a fireplace, sconces and ceiling decorations which all come from a French castle which can be seen depicted in the tapestries. Two French windows open onto a terrace with wrought iron railings. It looks onto the garden and beyond to the Alps. Next to the bedroom are a large dressing room, and an elegantly-restyled bathroom with top quality marble fittings, and wall sconces.

Call or email us to make an appointment or check out our calendar of events.