Villa Paradeisos, in collaboration with the Bunka Cultural Association (Bunka is Japanese for "Culture"), organises various events during the year focusing on Culture, Beauty and Nature.

An ideal hub between Italian and Japanese culture, or more generally Western and Eastern cultures, Villa Paradeisos is working to bring the two cultures closer together through cultivating mutual Knowledge. 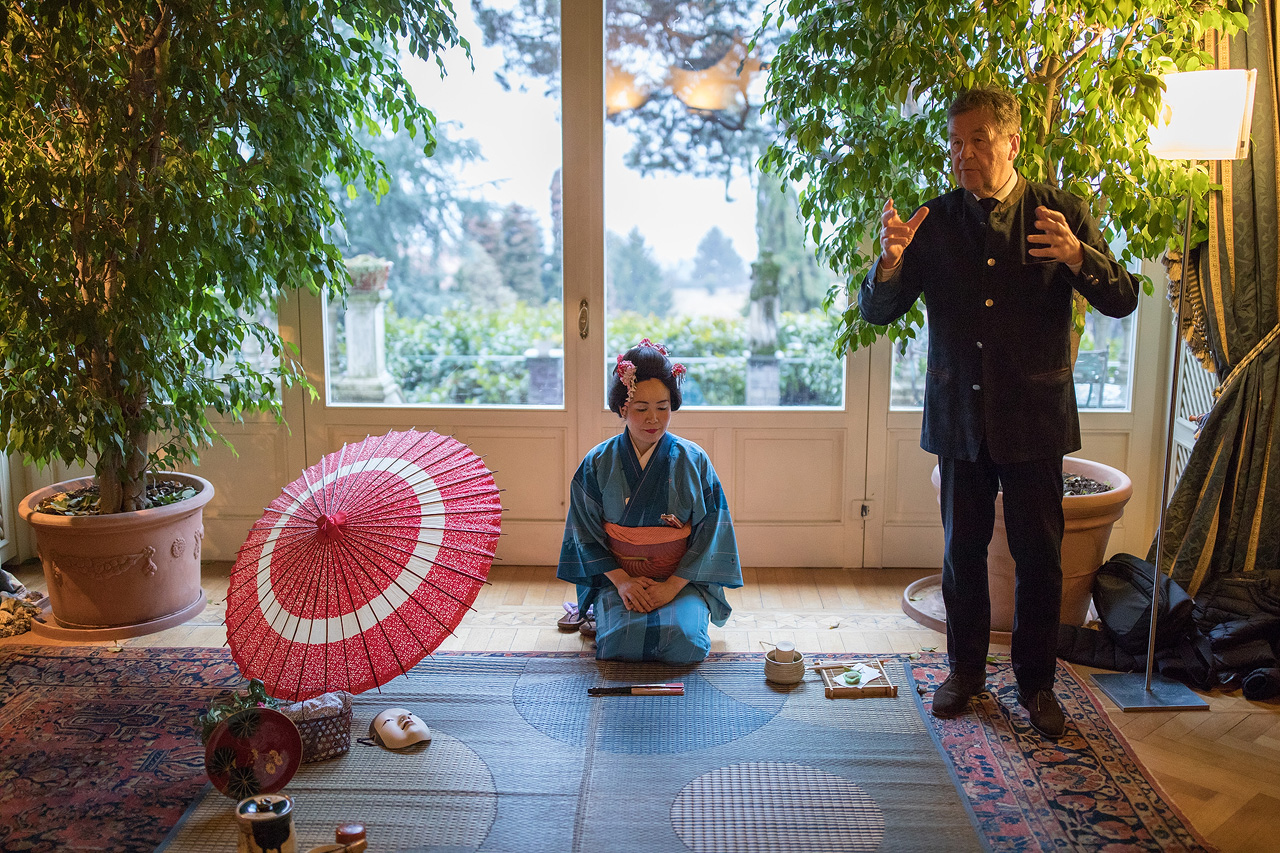 GUIDED TOUR OF THE GARDENS OF VILLA PARADEISOS

The owner Franco Cremante will accompany you through the meanders of the garden of Villa Paradeisos, telling the secrets of the Japanese Garden and of the Villa's historical park in Varese.

The history, emotions and peculiarities of the garden, in a path full of surprises, surrounded by Japanese plants and ancient trees. [Spacer height = "10px"]

An hour-long show with the artist Yoko Takada, who will perform in the arts of the Tea Ceremony - Cha no yu, the Japanese Dance - Nichibu, and the Japanese Song.

The artist will explain the deeper meanings of Japanese arts and thought.

"The tea ceremony is one of the most fascinating traditional rituals in Japan. Every gesture, every movement is imbued with sacredness, due to the strong spiritual connotation that leads participants to the ceremony to an inner search for themselves. [Spacer height =" 10px "]

The evolution of the ritual of the tea ceremony, together with the aesthetic development, the transformation from the spiritual point of view was based on the concepts of emptiness and immanence of every being in the nature of Buddha, awareness reached through meditation and inner contemplation. [Spacer height = "10px"]

The tea ceremony is recognized by Zen philosophy, like other arts such as painting, poetry, calligraphy and many religious argue that the depth of the essence of the vision of Zen could be achieved in the practice of tea as in meditation. [ spacer height = "10px"]

This profound spirituality is manifested through daily gestures, which, once they reach the most total calm and inner awareness, become so abstract and are a pure expression of the spirit. [Spacer height = "10px"]

The master who performs the tea ceremony nurtures an absolute detachment from his gestures; their refinement and elegance are representations of inner calm achieved and mastery in being guided by one's spirit and one's heart rather than the mind.

In the tea room the master is kneeling and during the preparation, the guest is left in the tokonoma, the niche in which a flower arrangement and a scroll is usually placed (a calligraphy, a painting, a haiku) hanging on the wall.

Maccha, a very bitter green tea, is offered during the tea ceremony; for this reason, before offering the tea, a sweet to be melted in the mouth is offered which reduces the bitter taste of maccha.

THE AWAKENING OF SPRING

A TEA WITH THE BRIDE

THE ART OF SHIATSU -

THE TALES OF A DIFFERENT CHRISTMAS -

THE BEAUTY FROM FAR-EAST -

The future of Villa Paradeisos

THE FUTURE HAS ALREADY BEGUN!

It has been opening to the public since October 2016: the park, the Japanese garden, the majestic rooms  and the greenhouse, with guided tours for all. In doing so, the message has been that the local landscape and the beauties of nature are our shared heritage. Villa Paradeisos is demonstrating a commitment to being - for both the local public and visitors - a living example of Art, Culture and especially Nature that best characterises the identity of this unique area, which rightly aspires to become one of the very first tourist destinations in Italy.

In addition, a programme of events was launched that, from its beginnings in promoting the general Knowledge and then specific aspects of Japanese culture, has been expanding. It is now reaching out to welcome partners and guests to use this place, unique for its beauty and charm, as a venue for pursuing their goals of communication, entertainment and learning.

The weddings taking place at Villa Paradeisos have already confirmed that this is a very attractive place both for the couples and their guests. We welcome wedding groups from all over Italy and also International ones.

We regularly hold the Japanese Tea Ceremony here, and Japanese Martial Arts have been practiced as well as Shiatsu, Bonsai, Ikebana and Kokedama. We have also had numerous art exhibitions, classical music concerts, theatrical productions and shows for children.

On 30 July 2017, the Tokyo Opera Association performed in the Park here at Villa Paradeisos. In a specially-constructed theatre that played host to more than 40 singers and Japanese actors, they performed the opera Takayama Ukon, the Blessed King, or the Sword or Love. It was the first time the opera had been staged in Italy. Two days later they performed the opera in the Vatican in the presence of Pope Francis. Despite the short notice, all the seats were sold out.


Given its history and identity, with the unique attraction that is the Japanese Garden, the future of Villa Paradeisos is therefore to establish a Centre of Activities and Events based around Beauty and Nature on the one hand, and on Knowledge and Communication on the other - primarily focusing on the cultures of Japan and Italy, and the East/West mission.

Public sector bodies also partner with us. For example the City of Varese is patron of many initiatives staged by Villa Paradeisos as champion of Nature Urbane festival for tourism development in the area. Another partner is the Japan Consulate here in Italy.

Indeed, it is our fervent desire that the territory as a whole would reap substantial economic benefits from the work we are doing. Indeed, we are currently exploring several international projects as potential examples of innovative models where sharing, technology and excellent quality can generate tangible benefits and prove most useful to local partners and operators. The objective is always for Villa Paradeisos to maintain its role as director, hub and activator.

WHY WE BELIEVE IN THE FUTURE OF VILLA PARADEISOS

On the one hand, Villa Paradeisos has no particularly outstanding abilities in mediation, no ideological, religious or political affiliations. Nor has it large financial resources or the backing of an industrial empire.

But on the other hand, it is very strong in the three cornerstones of Knowledge, Beauty and Nature, universal and unifying languages. These form the maximum protection against misunderstanding, disharmony and conflict that can make the relations between complementary economies such as those between Western and Eastern countries complicated, inefficient and unstable.

And so far, we have received a lot of encouraging feedback both from the Japanese television media and from members of the general public that have come to know about the projects.